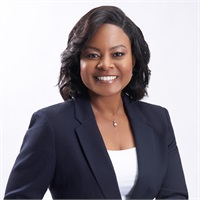 As a Financial Professonal at Apogee Financial Partners, Katina Walker leads with integrity and compassion as she celebrates each client's uniqueness.

Katina’s efforts are fueled by positivity and forming sincere relationships that are centered around respect. What this means to you is Katina consistently brings her best and will provide undivided attention. She appreciates each client’s individuality and has a knack for identifying ways in which each client can be served using a custom-tailored approach.

Katina honorably served her country in the U.S. Army and earned her associate degree in English Literature from Georgia State University. Her education continued when she obtained financial licenses for Life, Accident, and Sickness insurance.

One of Katina's passions is to help divorced single moms, like herself, gain back their financial security and build nest eggs for their children's future. Katina and her daughter volunteer for Restoring One's Hope of Atlanta, Inc., where they donate food and personal hygiene items, as well as hand -deliver lunch to the homeless. Katina is inspired by Dr. Martin Luther King, Jr.'s sentiment, "You don't have to see the whole staircase, just take the first step," when taking initiative or unknown endeavors.

Whether Katina is headed to work, getting ready to embark on a road trip, or attending an auto show, she starts each day with a 5 a.m. workout that energizes her for the day ahead. She takes immense pride in her work ethic, which has contributed to her having her first story published in an Anthology.

The real benefit when working with Katina is her zeal to ensure that everyone from low-income families to the wealthiest of clients are given the same level of courtesy and service. Katina resides in Buford, Georgia, with her daughter and their guinea pig and beta fish.

Katina Walker is Licensed to sell insurance in the state of Georgia.